When the Coombs House was built in 1905 it was generally referred to as “the most elegant house in Apalachicola” for its black cypress wall paneling, nine fireplaces, a twelve foot high entrance hall, ornate light fixtures, and a carved oak staircase leading up to the second floor past leaded glass windows. Indoor plumbing featuring a claw-footed bathtub may not have been considered part of the home’s elegance, but was still a rare and convenient luxury for that time and place.

The house was the pride and joy of James N. Coombs, successful entrepreneur, recognized as the wealthiest man in town for his ownership of three sawmills, the First National Bank of Apalachicola, and the Coombs Company, exporter of pine and cypress lumber to destinations around the world. In 1905 Apalachicola, located on the Gulf of Mexico at the mouth of the Apalachicola River, was a busy port of 3,000 inhabitants from which much of north Florida’s lumber was shipped.

Coombs was born in Oldtown, Maine, August 15, 1842, and like many young men who grew up in Maine at that time, worked at cutting trees and hauling them to the sawmills. When the Civil War broke out in 1861, Coombs and most of his contemporaries probably thought the fighting could be handled by the regular army, and the rebels would be defeated quickly. By October of the following year, after some stunning reverses for the Union Army, it became apparent that the war would be longer than had been thought. Twenty-one year old Coombs signed up for a nine month tour of duty with the 28th Maine Volunteer Infantry Regiment. A natural leader, he was immediately appointed a Sergeant in Company I. The regiment was sent to New York and embarked on a steam transport for New Orleans where it was assigned to General William Tecumseh Sherman’s Division and stationed at Donaldsonville, Louisiana.

At the end of May, 1863, Coombs was part of a detachment of 180 men who were marched nine miles to the front lines near Port Hudson where they participated in skirmishes with the loss of three killed and fourteen wounded. In another engagement four weeks later, it was reported that the unit had “repulsed a desperate assault of largely superior numbers of the enemy after three and a half hours, killing fifty-six and taking 130 prisoners.” The men of the 28th regiment lost one officer and 17 men killed, and 14 wounded. Shortly thereafter, Coombs’ company was moved to New Orleans where it took ship to New York, and from there traveled to Augusta, Maine where the men were discharged on August 31, 1863.

Back in Maine, Coombs married his childhood sweetheart, Maria A. Starrett, five years younger than he. The couple moved to Pensacola in 1871 where Coombs worked in the timber business. In 1877 they moved to Apalachicola where Coombs bought into the Sunny South sawmill which had been shut down for several years. Increased demand for lumber brought success to Coombs and enabled him to set up the Franklin County Lumber Company in Apalachicola and in nearby Carrabelle. Hewn logs were exported to Europe and South America, railroad ties to Mexico, and sawn pine lumber and shingles were sent north. Businesses in New Orleans were the major purchasers of cypress. A green cypress log would sink to the bottom if put into the river immediately after being cut. So sawmill operators like Coombs had the trees girdled, but let them stand until the sap had dried. Rafts of the much lighter cypress logs were floated down the river to the saw mills at Apalachicola and Carrabelle. The sound of the saws and the smell and sight of smoke from the sawmills alerted the passengers on inbound steamboats long before they reached the Apalachicola docks. The Columbus (GA) Enquirer could have had Coombs in mind when it reported in 1878: “Apalachicola is again on the rise. It is fast becoming a lumber depot. Several steam mills are now in successful operation and others are soon to begin. The supply of lumber in the region is inexhaustible. Lumbermen heretofore engaged at Pensacola have removed recently to Apalachicola.”

With all his business success, Jim Coombs did not neglect his political interests. He had always been an active member of the Republican Party, and usually attended Republican conventions. At one convention he met the up-and-coming young governor of New York, Theodore Roosevelt, and the two became friends. A local rumor had it that Teddy had offered him the opportunity to be the Republican candidate for Vice President of the United States in the election of 1904, but that Coombs had turned him down. In October, 1905, The Apalachicola Times reported that Coombs had taken the train to Jacksonville in order to meet with his old friend Roosevelt during his visit to that city.

In 1905, when James Coombs was at the peak of his career, he decided that his family needed a home that would reflect their social and economic status. He hired George Marshall, a builder responsible for the design and construction of many of the grand Victorian homes built in Apalachicola from 1890 to 1910. Marshall’s homes had many features in common: they were constructed of wood, including the inside walls and ceilings, usually had grand wrap-around verandas, were crowned with a widow’s walk, and occasionally had turrets. There was an open balcony on the second floor over the front door. Inside were gleaming oak floors and impressive carved oak staircases. The numerous coal burning fireplaces were faced with porcelain tiles and fronted with cast iron covers bearing raised images. As in many of these houses, the front door of the Coombs House was 42 inches wide, large enough for a coffin to be placed in the front hallway for a wake. Tragedy struck the Coombs family in 1911. At midnight on March 6 a fire started in the attic of the house and burned its way through the roof. Three volunteer horse drawn fire companies answered the call, and quickly pumped enough water onto the house to douse the fire. While the house was not destroyed, it was seriously damaged, and Mrs. Coombs’ prized furniture, bedding, china and linens were piled in a soaked heap in front of the house. Shocked and saddened, Mr. and Mrs. Coombs moved into the Franklin Hotel that night with the intention of living there until their house could be repaired. They never returned to their home. Mrs. Coombs, who had taken to her bed, died ten days later in the hotel. Many said she died of a broken heart. Three weeks after that, on April 8, James N. Coombs died. Both are buried, side-by-side, in the Chestnut Street cemetery, just across the street from their beloved Coombs House.

Various members of the Coombs family took up residence in the house during the next five decades. In the early 1960s the house was closed, boarded up, and left vacant except for an occasional homeless person who camped out in the empty rooms. Without care and maintenance, the structure began to deteriorate, and there was talk of condemnation and destruction. Windows were broken, the back balcony had fallen to the ground behind the house, the front and back yards were littered with debris and trash, and the once blossoming flower beds were wastelands of weeds.

Lynn Wilson, a well known interior designer of luxury hotel properties, and her airline executive husband, Bill Spohrer, paid their first visit to Apalachicola in 1978. They were appalled by the general run-down appearance of the town, and by the deterioration of once fine old mansions. But they were also fascinated by the town’s history, and by the potential for renovation and preservation of architecturally significant historic homes and commercial buildings. Lynn was particularly intrigued with the Coombs House. After several years of patient and persistent search, Lynn found that the owners of the house were scattered members of the Coombs family, and that they wanted to sell the property. Another year of discussions and negotiations and Lynn and Bill were able to purchase the neglected structure. Then reconstruction began. Lynn, who had renovated such historic grand hotels in Florida as the Biltmore in Coral Gables and the Vinoy Hotel in St. Petersburg, decided that the Coombs House could only be saved if converted to an inn, thus providing the motivation and the funds for preservation and maintenance. Using only local carpenters, craftsmen and painters, the project proceeded slowly. Lynn designed and built 11 additional bathrooms in such a way as to appear that they had always been an integral part of the house. A small modern kitchen was installed, balconies rebuilt, and beams replaced. Finally the renovation of the Coombs House was completed in August, 1994. Lynn furnished the house, now named “The Coombs Inn & Suites”, with antiques and paintings of the period, many taken from her personal collection.

In 1998, Lynn and Bill purchased another Victorian house one block away, the Marks house built in 1910 and endowed with many of the same Victorian architectural features that had attracted them to the Coombs house. Bathrooms were added (maintaining the Victorian charm, but with modern amenities like whirlpool massage spas), and a carriage house named Camellia Hall was redesigned as an elegant meeting hall for weddings and other special events. A gazebo was erected on the lawn with copies of classic statues. Painted a golden yellow (much to the shock of some local residents), the Inn became a landmark for visitors to Apalachicola, and earned a reputation by its beauty, comfort and decoration. The Coombs Inn & Suites was praised by The Tallahassee Democrat, The Atlanta Journal Constitution, The Miami Herald, The New York Times, and other newspapers all over the country. Country Inns Magazine gave it an award for “Affordable Luxury”, Travel and Leisure Magazine named it “One of the 30 Outstanding Small Inns in the United States,” and readers of Florida Monthly Magazine voted it “The Best Inn in Florida.”

Today, guests from around the world enjoy the Coombs Inn & Suites, most recently with mid-westerners increasingly visiting in the winter months. Apalachicola has also become a popular stop for visitors to Florida’s southern gulf coast areas of Naples and Sarasota, making their return drive home along scenic Highway 98 with a relaxing stay at the Coombs Inn & Suites on Florida’s Forgotten Coast. 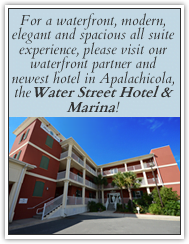